Has my dog been bitten by a snake?

With Spring mating season underway, snakes are becoming more active and the warmer weather is starting to draw them into homes and backyards. So, it’s important to stay aware and if you do see a snake, ensure your family and pets are well out of harm’s way.

Most snakes, with exceptions like the eastern brown snake and the coastal taipan which have a greater tendency for aggression, are only too happy to slink away from animals too big to serve as their prey. However, dogs are curious and playful – some are born hunters – which unfortunately means they may harass a snake and provoke it into an attack.

If you see your dog actually being bitten, you know 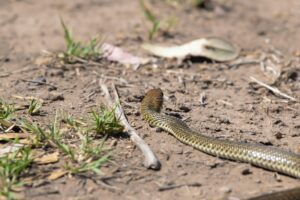 what you have to do: get your pet to a vet fast. This is more important than trying to recognise the type of snake because:

If your dog was wandering alone around your garden or in the bush, you may not even be aware that an encounter with a snake has taken place – that is, until your dog starts displaying symptoms which set alarm bells ringing. The symptoms may take anywhere from immediately to about a day to manifest themselves, depending on a variety of factors, such as:

The above criteria are also critical in terms of whether your dog will make a full recovery or not.

The symptoms to be aware of include:

The clincher as to whether these symptoms were actually due to a snake bite is if the tell-tale puncture wounds made by the fangs can be found on your dog’s body – typically its head or front paws. But faced with such grave health concerns the default must always be to rush your dog to the vet, keeping them as immobile and calm as possible in order to lessen the spread of the venom.

Once your dog is in the hands of the vet, you can be certain they’re in the best possible place and there’s usually nothing more for you personally to do other than wait. You may not know for certain what the outcome will be for at least 24 hours, but a high percentage of dogs who receive treatment will go on to make a full recovery.

Now you know the warning signs, please keep safe with your dog this snake season and have a plan in place in case of an emergency.