The recent floods have highlighted the dangers of dogs drinking contaminated water. This can be extremely dangerous for dogs as it can cause stomach bugs with a variety of symptoms such as diarrhea, which can be highly contagious. If you are still experiencing the effects of flooding and have contaminated water in the area near your home, it’s important to keep your dog away from any suspect water to avoid them ingesting it and causing any potentially harmful health issues.

Initially, it may seem like your dog just has a simple stomach ache but if you suspect they have ingested flood water they will likely start to show symptoms such as diarrhea or vomiting, which can mean they have developed a stomach bug or intestinal infection such as Gastroenteritis or Giardia.

Gastroenteritis is a broad term that includes any type of irritation or inflammation of the stomach and intestines. For example, it can include food poisoning, which often causes vomiting and diarrhea. 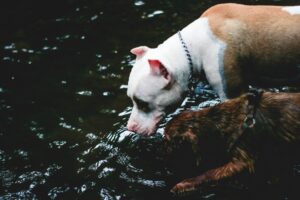 Symptoms in dogs include:

If your dog has gastroenteritis, they’ll probably experience any number of these symptoms for between one and three days. As with humans, there are many different causes for this illness. Some of the most common causes are eating or drinking something that disagrees with them, parasites and bacteria.

One possible cause of Gastroenteritis that we will discuss in this article is intestinal parasites such as Giardia.

Giardia is a parasite found in the intestines of dogs and other animals including humans that can cause severe gastrointestinal disease. In humans, symptoms of giardia include stomach cramps, nausea, and diarrhea. Dogs with this type of infection may also experience diarrhea and vomiting, with the severity of symptoms varying from mild to severe.

How is Giardia Transmitted in Dogs?

Giardia eggs are passed out in the faeces of infected individuals and can be transmitted by coming into contact with contaminated water, food, soil or plants, or through contact with faeces from an infected dog or cat. Infection usually occurs when these eggs are ingested. Giardia parasites live in water and if your dog drinks from a contaminated stream, river, pond or floodwaters that another animal has urinated in or pooped in, your pooch could get infected as well.

How to Diagnose Giardia?

The most common ways to tell if your dog has been infected with Giardia is if they show symptoms such as vomiting and diarrhea, which may last anywhere from a few days to several weeks. They may also experience a lack of appetite. You may want to take them off of their regular diet during this time too since it could make things worse for them (and you).

Giardia can be extremely contagious so if your dog contracts it be sure to keep them safe at home until they have fully recovered. Absolutely DO NOT send them to daycare as this will put other dogs at risk of contracting the infection. If your dog is displaying symptoms it is recommended to take your dog to the vet to get a correct diagnosis and they will recommend suitable treatment and recovery management solutions.

How is Giardia Treated?

Depending on the severity of symptoms, your vet may prescribe medication such as a course of antibiotics. If your dog is severely dehydrated they may need to be put on an IV drip to replenish lost fluids.

According to PetMD, dogs that have been infected with Giardia will not become immune and can easily become reinfected. So it’s extremely important to keep your dog well away from floodwaters and make sure they don’t drink it or eat anything from the wet ground.

If you notice your dog is displaying any of the common symptoms of Gastroenteritis or Giardia such as diarrhea, vomiting, lethargy or lack of appetite, keep them in a safe place at home, call your vet straight away and don’t send them back to daycare until their symptoms have eased and they’re feeling like their happy, tail-wagging selves again.