There are many reasons why humans and dogs share such a special bond. Dogs have been man’s best friend for centuries. They were the first animals to be domesticated by humans, and have been an essential part of human society ever since. The love people have for their furry friends is unwavering. From understanding each other’s emotions to being protective of one another, here are five reasons why humans and our canine companions share such a special bond.

Dogs are one of the most loyal animals on earth. They are protective and give us endless amounts of love and the feeling of being needed. When you introduce a dog into your family, you’ll be given the gift of unconditional love for life. Dogs will never let you down and will stand by you through thick and thin, even when times get tough. The only thing they ask for in return is your love and attention. 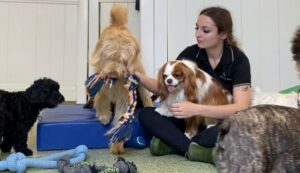 Dogs show great empathy for their humans and they know when something is wrong with their owner. When that happens, they’ll do anything to console them and make them feel better again by adding some extra cuddles and kisses to the mix.

Dogs also provide comfort and happiness to people who may not be as lucky as others in life and need someone who will always care about them unconditionally.

Dogs are instinctively programmed to do as they’re told. It’s an innate response to do what their humans command them to do. Dogs also never cease to amaze us with the things they can be trained to do.

While some breeds are better at being obedient than others, all dogs have the potential for being obedient and following commands from their humans. This trait has been bred into them over time, making man’s best friend just that—a companion that will listen and obey you without question or hesitation.

Dogs are not only man’s best friend, but they are also there to make us feel needed. They do this by fulfilling their duties as companion animals, which includes things like doing tricks, sitting on command, and playing fetch, as well as simply being there for us in times of need. Pets act as a loyal friend who won’t judge you and will always be there for you no matter what!

Pets can help us to feel less lonely and studies have shown that people with pets experience less symptoms of loneliness and greater life satisfaction compared to people who don’t have a pet.

Dogs can be a great form of stress relief for humans. When a person is stressed, they experience increased levels of cortisol. Studies show that when people pet their dogs, the dog’s presence lowers cortisol levels in humans by up to 50 percent.

This is because a person’s heart rate slows down and their blood pressure goes down when they spend time with their furry pals. When a person spends time with their dog, it actually creates a similar hormone response as if the human were taking care of a child.

In addition to lowering stress levels, dogs can provide protection from depression and anxiety by boosting the chemicals in our brain that produce positive feelings like serotonin and dopamine.

So next time you’re feeling stressed out, head outside and take your pup for a walk!

For those who are struggling with depression, anxiety, or other mental health issues, therapy dogs can be highly beneficial.

Dogs have been used as therapy animals for centuries. The American Society for the Prevention of Cruelty to Animals (ASPCA) suggests therapy dogs can provide comfort and companionship for people who are recovering from illness or surgery, who have disabilities, or who are elderly.

The human-animal bond is known to have a positive effect on both the person and the dog. For the person with a disability or illness, this time spent with their pet will help alleviate symptoms of their conditions. For the dog, they get to spend time with their favourite person and make someone happy—which is always a great feeling.

Dogs are helpful, loyal, and comforting and bring us an abundance of joy and happiness. Dogs need love just as much as humans do and they both provide it to each other in different ways that complement one another beautifully.