How to Handle Dog Attacks on a Walk: A Guide for You and Your Pooch

Dog attacks can happen anywhere, at any time. They might happen in a secluded park, in front of your home or while out on your daily walk. For anyone who has experienced a dog attack, whether it be an attack on you or your dog or an attack by your dog on another dog or human, you’ll know how incredibly scary it can be.

When you and your dog are out for a walk, you probably don’t expect to encounter a threatening situation with another dog. But dog attacks are unfortunately quite common and it has recently been reported in the media that they are on the rise in Australia. If you are ever unfortunate enough to be attacked by a dog, it’s important to know how to handle it. There’s no time to panic – you have to remain calm and make quick decisions to help you and your pet stay safe and unharmed. 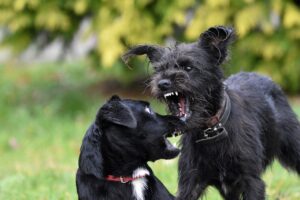 There are many different reasons why dogs may attack other dogs or humans. When dogs see other dogs, they tend to get excited and want to play. It’s natural for dogs to want to play with other dogs, but if a dog is showing signs of being aggressive, they might be exhibiting this behaviour because they feel threatened by the other dog.

Dogs are very territorial so if they spot another pup while out on a walk they may become aggressive in order to protect what they feel is theirs, such as their owner or nearby areas that the dog frequently patrols.

Encountering an aggressive dog while out walking – Bec’s Story

Knowing how to handle scary encounters with other dogs is key to ensuring the safety of you and your pet whilst out walking. But knowing what to do in theory and actually being in a real-life situation are two very different things.

Bec from the Paddington Pups team had a scary encounter recently during a walk with her pooch when they were both attacked by another dog. Below is her story:

Hemera and I were out on our usual early morning walk (4am). When we came around a bend of the street, we noticed an unfamiliar dog running toward us, alone.

When the dog began to growl, I knew this dog was unstable and I decided to pick Hemera up to keep her safe and out of the way. Moments later the dog lunged and snapped at us, biting my leg and piercing the skin multiple times in multiple areas, injuring my leg.

I tried to be as calm and quiet as I possibly could be while using my other leg (my only other free limb) to steer it away.

After what felt like a lifetime (probably about 10 seconds) the damage had already been done. The dog wasn’t quite getting the response it expected (eg. no screaming or flailing) and it stepped back long enough and far enough that I was able to push it and kick it away. I was alone and bleeding and I needed this dog to leave – if I didn’t stop it the injuries would be much worse. My strategies for getting the dog to leave me alone eventually paid off enough for it to retreat and it whimpered and ran off in defeat.

After gathering myself, Hemera and I continued our walk home (after all it was 4am and I was alone).

All said and done I was left with multiple puncture marks all over my leg from my knee down the front and around my leg front and back, torn skin, bites and bruises, but Hemera was untouched, which I am happy about.

It cost me a trip to the hospital where they needed to clean and scrub the wounds, multiple days of lost wages and recovery time, a course of antibiotics and a lot of stress, anxiety and anguish.

I reported the injury to Brisbane City Council but to date as far as I am aware this dangerous dog is still roaming the streets.

Had this happened to someone who didn’t know how to observe and react in this situation, it would have been significantly worse.

It’s impossible to fully prepare for an encounter with an aggressive dog but being aware of some general strategies will help you to feel more confident in knowing how to react when faced with a potentially dangerous situation.

As Bec’s story illustrates, it’s important to be vigilant and aware of your surroundings when out on a walk with your dog. The approach Bec took in assessing the situation, noticing the other dogs’ body language and remaining quiet and calm throughout the encounter were all key strategies in preventing the outcome from being much worse.

Strategies to prevent an attack while walking your dog

There are plenty of things you can do to reduce the risk of potentially dangerous or threatening situations when walking your dog, including the following:

What to do after the event of a dog attack?

If your dog has been hurt during an attack, take them to your nearest veterinarian to have them checked out and make sure they haven’t suffered any serious injuries. Even if there are no obvious signs of injury externally, they may have incurred internal injuries so it’s important to have them assessed for damages by a vet just to be sure.

If you have been bitten or injured by a dog, make sure you go and see your doctor as soon as possible, or check into emergency at the hospital if you have sustained any serious injuries.

A dog attack can be terrifying and very traumatic for both pet owners and dogs. Be sure to monitor your dogs’ wellbeing carefully after the event of an attack. They may be traumatised by the experience and this could affect them mentally and emotionally long after the physical scars have healed.

Where/How to report a dog attack?

If you and your dog are a victim of a dog attack, or if your dog is involved in an attack on a person or another animal, it’s best to report the attack to your local council. In Brisbane, you can report a dog attack to Brisbane City Council by calling 07 3403 8888 and they will investigate the situation and take appropriate action to prevent further risk and ensure the safety of the community.